The strength of the EBT START program lies in the total body approach, starting with an overall assessment of the whole horse including hoof balance. The assessment identifies the key areas for treatment, with the initial treatment often ‘unlocking’ other areas of the body. This can resolve deeper long-standing issues that may have been affecting performance and general well-being.

The benefits of an Equine Body Therapy treatment to your horse include:

“ We have been utilising the services of EBT for many years now and cannot speak highly enough about the results and benefits we see in our campdraft horses.”

Sue Parker travels extensively throughout Victoria, New South Wales and Tasmania to treat horses with Equine Body Therapy methods. If you would like your horses to experience the benefits of EBT please text or phone (leave a message if you don’t reach her – she’s often busy treating horses!) on 0438 803 381.

Clients are welcome to bring their horses to Sue Parker’s property for assessment and treatment at 310 Sawmill Road, Springmount, Victoria, 3364. The facility has a six-stable complex with day yards, another three secure day yards, undercover professional veterinary horse crush, round yard, outdoor and indoor arena for all weather conditions and parking area. 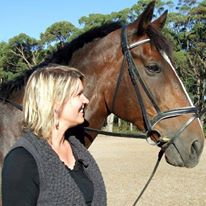 A lovely message of appreciation to Sue from well known Ballarat based equestrienne Jan McIver (pictured with her beautiful ‘Acorn’). Jan is a FEI level dressage competitor and Equestrian Australia Pony Club qualified coach – with more than 20 years as a Pony Club instructor.

“What a transformation your treatment has made to my young gelding! No longer in pain, his canter transitions and bending to the right have improved markedly. He is back to being my happy young Warmblood once again.” 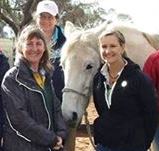 From Karyn Kelly of Smythesdale, Victoria. Karyn stands to the front left of Sue’s mare ‘Grace’ in this photo.

My horse and I both came to Sue Parker in a bad way. I was extremely upset that due to my ignorance I had hurt my horse severely with an ill fitting saddl…e. He was so sore and grumpy and lost all condition and it was all my doing. But Sue has so much empathy and patience that I soon started to feel better about this situation. She explained calmly that “we can fix this, it’ll be ok”.

Sure enough even after one visit and time out in the paddock for a few weeks he had dramatically improved. We only visited Sue three times over an eight month period and with the ground exercises she showed me he is now ready to ride again. He has completely forgiven me and is eager to go trail riding again. Of course Sue has helped me find an appropriate saddle too.

Sue and her fellow Equine Body Therapy practitioner Kim Blanch are both very capable, compassionate, trustworthy and friendly. I would highly recommend them and they do NOT overcharge in any way. In fact they will listen intently to what you have to say or ask (no question is ridiculous) and freely offer their advice. I am now doing Sue’s workshops to gain further knowledge to ensure my horse’s comfort as I have seen what a difference Equine Body Therapy makes and how it has strengthened our bond. 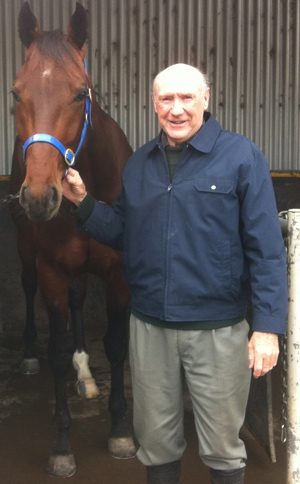 Maryborough based Peter Gleeson is one of Australia’s most successful Standardbred breeders, yearling sale vendors and harness racing owners. Peter has bred hundreds of winners over the years with star pacing names produced on his property such as Safe & Sound, Copper Way and Larrakeyah Lady.

My name is Peter Gleeson and I’m from Maryborough, Victoria, Australia. I breed and agist Standardbreds for a living. I first met Sue Parker in 2005. Sue was recommended to me as someone who could repair horses whose body had problems and could not perform at their best. Our 2 year old filly ‘Secret Life’ was in training for 10 weeks. But the trainer told me she had problems he couldn’t fix. He had her teeth seen to and a ‘muscle man’ treat her, but she had lost weight and couldn’t go any quicker than 3/4 pace without going off her stride. She would stand in her yard all day with her head hanging low. When the trainer brought her back to me she had lost condition, was very dull in the coat and eye, had no appetite, was moving very slowly and generally had no life in her at all.

When Sue first treated her, gently touching her here and there I had no idea what she was doing. I had never seen anyone doing this before and I was thinking gee Sue doesn’t seem to be doing anything much to this horse. But anyway Sue was our last resort before we retired ‘Secret Life’ and bred from her, unraced. The next day after Sue’s treatment the filly was walking a bit smarter and started to eat again. I thought that’s an improvement. On day two she was running around doing circle work and had cleaned up her feed. But the following day (day three) I would love to have come home with a movie camera. ‘Secret Life’ was charging around her paddock like a dog let off a chain, bucking and kicking madly and there was no stopping her! It was like ‘hey look at me, look at what I can do!’

Sue was coming back seven days after the first treatment to do her again. When I tied her up I noticed her eyes were very bright again and bulging out of her head and then I took her rug off just as Sue was walking up to her. We couldn’t believe the change in the filly’s coat and condition. She was shining and had put on a lot of condition. All up Sue treated her four times in five weeks and then said now you can put her back into work. ‘Secret Life’ won five of her first seven races and after two seasons of racing had won $86,000. Sue has treated lots of horses for me since. What I have found is most horses only take about three and a half weeks spell after Sue’s treatments and they look very well again in the coat and condition and are ready to start work again, if you wish.

Sue also has workshops where she teaches people to assess their own horses for problems. I have attended two of these workshops and I thought everything Sue showed us was a must for anybody who wanted to have anything to do with horses. Owners, punters, stewards, breeders and of course trainers, drivers and riders. I think everything Sue teaches should be compulsory for anyone who wants to handle horses and it should be taught at riding schools, jockey schools and harness racing training centres. To me it is a must.

I have been involved in harness racing for 40 years. Five as a strapper for a leading Melbourne Trainer G.D. Dave Wilson, five as a bloodstock agent for Wright Stephenson & Co and Dalgety Bloodstock (which is now owned by Inglis). I’ve never come across a trainer who actually understands what is going on muscle wise in a horse’s body. They would all benefit from Sue’s knowledge. What Sue does also helps to stop a horse from breaking down by keeping it’s weight evenly distributed rather than overloading certain areas, to avoid pain.

Just as an extra – the horse Sue initially treated for me ‘Secret Life’ has become a very good broodmare. Her first five foals have all won, to date amassing $440,000. Sue has been using Equine Body Therapy on ‘Secret Life’s’ offspring. She has treated ‘Beauty Secret’ who has now won nearly $300,000 in stakes – including the Victoria Oaks (Group One). Sue has also been treating ‘Secret Life’s’ top performaing colt ‘Major Secret’ who has now won a group one as a two year old with success in the $100,000 Vicbred Super Series Final recently.

I hope my experiences are helpful to others. 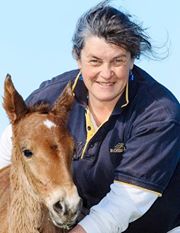 I have known Sue Parker for 10 years, having been introduced to her and her work when she performed a miracle on a standardbred filly bred at our farm. Let me recount the story to explain why I am impressed.

Three different trainers had sacked the filly, and Sue was asked to treat her in an attempt to salvage her as a broodmare – she was listless, dull in the coat, lacking muscle and seemed on a downward spiral. Only 48 hours after the treatment she sparked up, started eating, and was soon running round the paddock full of life and energy. Put back into work she continued to thrive, winning five of her first seven race starts, and going on to be a good racemare with earnings of over $80,000.

The mare is now a broodmare, all her foals so far have won races, two of them are top class juvenile performers and the collective prize money won by her progeny and their progeny is in excess of $420,000 – this was all made possible by some magic worked by those little Sue Parker fingers on that fateful day!

This case opened the way for a professional collaboration with Sue on many other occasions. As a busy veterinary practitioner, I am often presented with equine patients whose problems I can fix only in part, and also with some that I can’t help at all but Sue can.

The big strength of Sue’s Therapies lies in the total body approach, starting with an overall assessment of the whole horse. Sue can then identify the key areas for treatment, with the initial treatment often “unlocking” other areas of the body to resolve deeper long-standing issues that may have been affecting performance and general well being.

Sue has been able to teach me the basics of her treatment principles, although I do not yet have her ‘touch’ which is probably innate but also comes from a depth of experience. I am then able to use versions of Sue’s treatments in my daily work with horses of all breeds, types and performance levels to the benefit of them and their owners.

I have participated in several of Sue’s workshops and observed her ability to pass on some of her knowledge and expertise to horse owners allowing them to better care for their own animals. She has broken down her assessment and treatment regimes into a clear, easy to follow step by step study method, which she guides participants through both in theory and hands-on, giving them the tools to reproduce effective therapies themselves.

I highly recommend Sue Parker and her Equine Body Therapy programmes for both horses and their owners.

“Would like to say a massive thankyou to Sue for all the treatments that she has given Buzzzz (Whataclassic) at such a young age this horse wouldn’t be able to achieved and got where he has today… Thanks so so much.” — feeling blessed at Doublehaich Stud.

“We have been utilising the services of EBT for many years now and cannot speak highly enough about the results and benefits we see in our campdraft horses. We attribute the ongoing well-being and suppleness of all our horses to regular visits from Sue and the team. Both our older and younger horses benefit from ongoing regular treatments.”